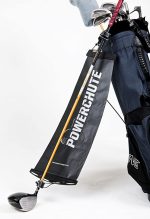 It doesn't happen often, but if it does we'll email you!

Powerchute is the ultimate in golf performance training technology. Powerchute’s patented design generates shaft and clubhead resistance to significantly increase clubhead speed and driving distance while delivering significant improvements to the golf swing. Powerchute was originally conceived for World Long Drive competitors and has been redesigned and reengineered by Jim Sowerwine, creator of the award winning Inside Approach ‘Slice Correction Trainer’, (awarded the ‘Swing Trainer of the Year’ by ‘Golf Digest Magazine’ 2004 and 2005). “If you can increase your swing speed by 3 or 4 mph, That’s 15 yards or more… that’s a pretty nice thing for a person to have.” Jack Nicklaus

The Powerchute Pro is resistance training technology that helps you swing the club faster and smash the ball farther and straighter than you ever imagined possible.